Have we mentioned once or twice before that this was the day Lancaster was the capitol of the United States? Forgive our overexcitement – but how cool is that?! 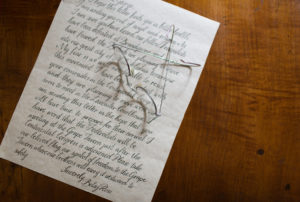 So here’s how it happened:

On September 27, 1777, during the American Revolution, the Continental Congress set up camp in Lancaster, PA after Philadelphia was captured by the British. The Congress only met in the city one day before continuing on to York. The Continental Congress moved and met many times during the war, but they usually stayed in the same place for days or even months. So the fact that Lancaster is notable for even just ONE day must mean that our little Amish country is pretty cool.

Why it matters to us:

So you might be wondering why it’s so interesting to us. Well, we have some stories to tell! Call them luck, call them fate, call them whatever you’d like – we think they’re a little mind-blowing. Before Escape. On Queen came to be, rooms were being planned and stories created. September 1777 was on the table from the start and the story and focus developed into a room that Melanie and Heather thought would be great as part of our history and as an escape challenge.

At the time, our location had not been established. The initial scouting was actually in Harrisburg. One thing led to another and 43 N. Queen Street kind of fell into our laps! Once the lease was signed, we began communicating with Aurora Films to put the storylines into picture. Finding a location to shoot the scenes wasn’t as difficult as it initially seemed.

You see, Heather’s kids are… explorers. One second, Scarlett is right beside you and then you close your eyes to sneeze and before you have the chance to recover, she’s halfway down the street, in the neighbors garage, already dressed in their princess clothes, riding a bicycle. (Slightly stretched, but you get it). One day, Heather found that Scarlett had wandered to the neighbor’s yard behind their house. (And when I say “neighbor,” I mean, the house down the hill, through the fence, and across the yard.) As this became a common occurrence, Heather quickly became friends with the older couple who lived in this beautiful, historic home. 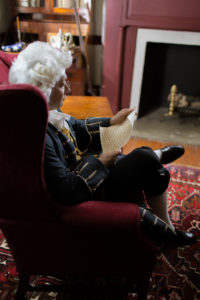 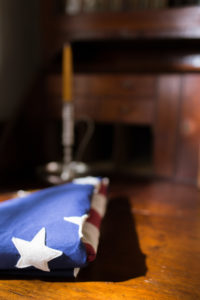 When it came time to film the short clips for our rooms, she thought to ask the couple if they would mind the filming taking place at their home. It was a crisp morning on the day of the shoot and we learned a lot about the history of the location. Apart from structural necessities and a few updates, the home was in its original condition – original hardwood floors, original stone, filled with historic furniture. The home, built in the 1760’s may have been a home that George Ross visited during the war.

If you’ve played our room or watched our video, you’ll know that the storyline falls on George Ross. Our story is that George’s niece has asked her uncle to keep the flag safe but George has fallen ill. You have an hour to get into his office, rescue the flag and return it to the Grape Tavern (where George Ross would frequent after workdays) before the British come.

So here, we find ourselves filming in the home of a member of the Continental Congress, with the chance that other congressmen were at one time or another, in the home as well! During the shoot, Brad, from Aurora Films stopped and said, “the Grape Tavern? You know there’s a plaque on our building that says ‘The Grape Inn.’” So not only are we filming in a home that our lead protagonist may have really been inside of, but the Tavern that is noted as his evening stop is right across the street from our building!

It’s fascinating how history can connect moments, people, and things. We love that our history room has a little history itself! So here’s to Capitol Day and all the history that made it!