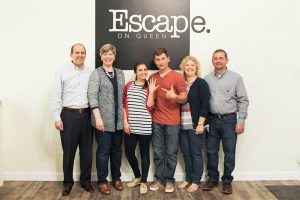 In the first month of our opening, we received the most exciting email. To this day, this is one of my favorite Escape. memories. “I have a fun surprise that you can’t tell anyone!” Melanie said as she greeted me at the door. Unsure of whether I wanted to be the keeper of this super big secret, I hesitantly asked what it was. She proceeded to tell me about the email we received from Mitch, asking if it would be possible to use one of the escape rooms to propose to his girlfriend, Lydia.

I may have squealed when I heard the big secret because I love engagements and weddings… and I’ll be honest, it was tough to keep my mouth shut. As soon as the secret was in the air between us, Melanie and I came up with a list of possibilities. “Maybe we could hide the ring in the…” (Did you really think I would give away a hiding spot?) “…or we could write it on the…” “What if we switch it out for the…” and on and on we went.

It felt like years passed before the time came to make concrete plans. Mitch came the night before with his soon-to-be mother-in-law to make sure the night would go without a hitch. We proposed our hiding spot, along with the details of the evening. To keep it from being obvious that something was going on, we kept all the puzzles a secret so it would all be new to Mitch as well.

The next evening, Mitch, Lydia, and both of their parents came to try out Escape. while Lydia was still home for spring break… or so she thought. While they played the room, Melanie and I watched, sitting on the edge of our seats. I had my camera along, ready to discretely pop into the room when the time came to get some sneaky pictures of the happenings. The moms were hilarious all night, timidly opening things, afraid they’d accidentally find the ring. After every puzzle, they’d clean it up and put it away for us so we could share these pictures with you. Thanks, moms! 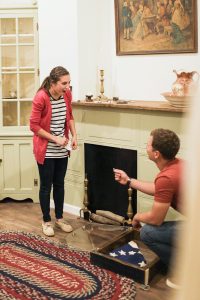 The closer they got to the last puzzle, the more anxious I got. I don’t know how Mitch kept it together because my palms were sweaty and I couldn’t stand still. Finally, they retrieved the flag to save the nation. Mitch was conveniently down on one knee, pulling the flag out when he found the little rolled up scroll. He handed it to Lyida who opened it and read, “One star to the right.” As she looked away from the note, back at Mitch, who was down on his knee, pulling the ring from the star on the flag. Oh wow, my heart is racing just telling the story again! 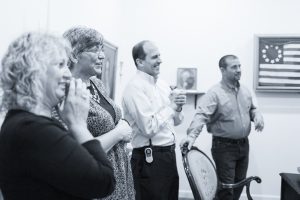 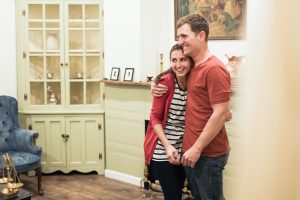 She obviously said yes or this would be the most awkward and depressing blog you’ve ever read. Congratulations, Mitch and Lydia, on your engagement and being our first Escape. engagement! 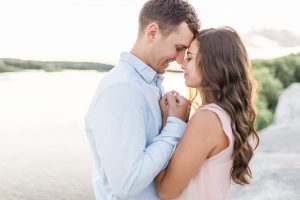